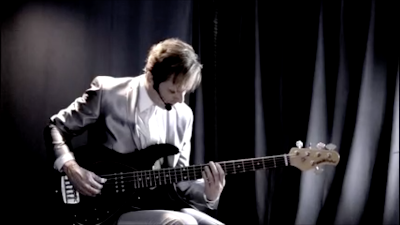 Polyphonic bassist Kyle F Turner captures the deepest grooves in us all, creating a magnetic ambience with a combination of original songs and provocatively reimagined covers. Relax and listen as you journey through the dimensions of his musical world where love and creativity are endless.

If you had told Kyle F Turner 25 years ago...
...that he'd be in a record-breaking Las Vegas band, he'd have laughed, picked up his bass gear, and headed into the subway toward one of his 10 working bands’ shows in Manhattan. After all, he was on the cutting edge of creativity in New York City. His edgy Hard Rock Swing band, Kyoti, employed 8 guitarists (a’ la Brian May of Queen fame) instead of a horn section, playing to packed houses frequented by members of Paul Shaffer’s CBS Orchestra and other music luminaries. He was playing soul tribute shows at BB King’s in Times Square. Not to mention the endless club dates, and singer songwriters he shared stages with; Nora Jones and Chaka Khan, among others.

After a long career in the New York live music scene...
...and playing the Emerging Artist Stage at Woodstock ‘99, Mr. Turner headed to Las Vegas in 2004. There he joined Sine’ RiRa (Gaelic for “This Is Mayhem”) at The Nine Fine Irishmen pub located in the NYNY Casino, playing six nights a week for 14 years; the longest-running band gig in Las Vegas history to date. No, the Kyle of 25 years ago would not have believed it. Then again, before music entered his life, he was a young Oklahoma man training for the Presbyterian ministry... belief became an elastic thing.

Posted by Fuso Italian Restaurant at 10:00 AM