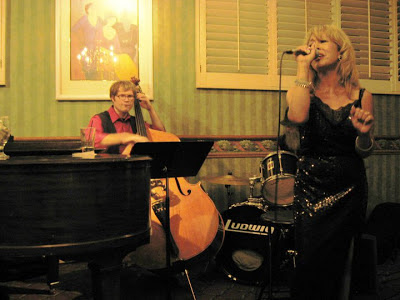 Anthony (Tony) Archimedes, music and jazz educator of St. Mary's College in Moraga and in San Francisco is a versatile musician, whose craft is not only playing  saxophone, flute, trombone and clarinet, but string bass and keyboards as well. Tony is a local music icon favorite and loved and respected by many.

Dennis "Bass" Bittner a scientist and avid performer enjoys many genres of music, plays everything from rock and country to jazz and blues is also a marathon runner and climber and has spent much time traveling the world with his musical talents and interests.

Darlyn "Pearl" originally from Alaska is the group's Band Leader and has performed throughout
Alaska and the Northwest and now in the Bay Area, formerly a member of the Singing Blue Stars of the USS Hornet.  Each of the musicians share the common bond and dedication of keeping live music and jazz traditions alive.
Posted by Fuso Italian Restaurant at 10:00 AM