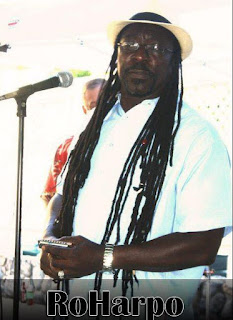 ﻿
Featured Artist
Wine Tasting  with Featured Wineries and Wines During Performances
All Musicians, Singers and Wine Tasters are Welcome ~ Featured Artists will be Presented on Occasion

RoHarpo And The Blues Busters

Roosevelt Lands, (aka) Roharpo was born in New Orleans La. & Grew-up in Baton Rouge La...I come from a family of musician, where music was always around, may it be played live or by record...My first instrument was a bass, but my instructor was a little on the don't give a damn side of teaching a young person like myself...this took away my interest in playing music...I was always interested in Blues, growing up around it was good thing, when my father & he brothers would get together in the evening with a guitar & bass & drum as they drink & sing the blues late in the evening...They were so emotional, This is my anut's who I'm talking about, as they dance & let there feel show...I then told myself that the Blues is spiritual...I alway had & interest in the Harmonica, It was an instrument that was small with big sounds...I picked it up & put it down a 100 or more time until one day I made some notes come together & it sounded good to m y ear...That was six yrs ago & I'm still learning to play this wonderful instrument...My band members, I met each one of those guys through playing music at other venues...Eric & I met through a buddy of my, Bobby Wright...He & I use to do all the Jam Session in town just about...I was learning through him, he was good at playing his guitar, but he wasn't ready to commit himself completely in the music game...So I moved on...Bob Jones is someone I met out at some jam & we talked got to know each other...I liked the way he plays his keyboard...He has a rhythm about himself that is him groove, not only to me but anyone that listen to him play...Everybody has hang-up that hender there growth from moving up, but I believe in change, thats why we are playin together now...Tommy, I met him at a Jam Session I was hosting he would be at every jam & the other players was feeling him so I asked him was he playing with anyone, his answer was no, he's a guitar player & he's good at it & he is spiritually into his game, That why we are still playing together...Big Ken, He a good guy & a wonderful bass player, but his degree of playing is not a commitment as to make a choice when its time to play music...I mean like if I have a gig tomorrow & I tell him, "are you playing?" He would chose to do the other thing than music, After I talk about him a commitment that I need, he's still with me...This is the 'Roharpo & The Blues Busters' I Believe if we can come together with the same frame of mind we can become a great Blues Band...
Posted by Fuso Italian Restaurant at 12:30 PM